Hey all. I’m going to write this one privately so I can throw it at a million different publishing companies to see how that game plays out.

As a teaser, here’s the first chapter as it stands in my current draft. Of course, my current draft is also only about 15-20% of the total book length, so it’s definitely early in development. The goal is to write this one when I have more time so that it at least keeps up in bursts with Dead End. We’ll see if that stays true, however.

This is basically a first draft, and may be even more messy that Dead End (but it should be about the same “messy”).

This story takes place in the same “story universe” as Dead End (not to be confused with “same universe”).

Istuuc broke away from his meditative state, something he still direly needed. “Sorry,” he said. “I zoned out a little bit, there.”

“It’s urgent. Your mother, she—you should go see her. They found her in real bad shape, sir.”

Istuuc ran to his door once he unearthed himself from piles of paperwork, his desk and chair, and the boxes of administrative records that caged him. He opened his door to the woman, an Administrator clerk; Istuuc’s black hair, though short and already showing signs of gray, was still full and completely disheveled in several directions. Completing his worn look, he hadn’t shaved in over a week—not that it was particularly full.

“Damn, that’s going to take a bit to reach. She must have been near the mansion. Thank the Gods she was in the capital, at least.”

The woman peeked into his office. “Guildmaster Zault, do you mind if I get some help to organize these records while you’re gone? It’ll make things easy to maintain while you’re with her.”

“Sure, go on, Seon. I don’t mind at all—it’s for the best, honestly.” Istuuc turned back into his office to fish around the paper folders and other strewn-about objects until he located his leather jacket. “It’s mostly records on the Ts and Bs; you know, about their current argument about the Bachron construction for the Joint’s new barracks,” he said.

“Right, of course.” The young A watched Istuuc hurry out of his office and down the hall. She called out as he turned the corner, “Hope she’s alright, sir.”

“Thanks.” Istuuc then shut the As side-door exit and made his way through the waking streets of Zatyon.

In thinking of his mother, Istuuc noticed how much the city had changed from his childhood. When she had free time, his mother would take him about the sprawling city and point out all the interesting buildings. Though, between his parents, it was his dad who had the free time. But that was when he was almost too young to even retain anything. It was all so hazy, more imagined than factual; still, he wondered just how much more change he would be alive to see.

Istuuc jogged past the local station, waiting for the less-populated stretches to air-dash. The more casual pace continued to distract his thoughts with memories from his youth until he finally left the densely populated area he worked in. Istuuc shook away the melancholic nostalgia that directed his thoughts and prepared for air-dashing manipulation. Some called it a “technique” or “spell,” but for most of his life, it was practically sorcery—even now, he found it hard to execute. But considering the news of his mother, Istuuc didn’t care if he slipped. As a gust of wind formed behind him, Istuuc launched forward with long strides.

A sharp, biting chill ate at his cheeks as he accelerated further, and his eyes dried out immediately—but he had to keep them wide open for random people who might get in the way. It was typically against Zatyon law to use any spell, technique, or manipulation in public areas like the open streets; though he was an exception, being a guildmaster, it still meant most citizens often forgot to pay attention when walking. Thankfully, the sun hadn’t fully left the horizon, and the Administrators Guild was a few districts away from any manufacturing or distribution centers where most Andrians with dawn-time jobs worked.

Still, it was just bright enough outside that Istuuc could see the cobble roads and smooth-brick buildings safely without much concern for tripping. A few stores were already open, their lamps lit and doors unlocked, but most other windows and glass-filled doors were unlit and covered with cloth drapes. Traveling about twice as fast as he could sprint without air-dashing, Istuuc did his best to stop inspecting every little detail and focus on potential obstacles and to instead focus on maintaining the technique. Even at his unskilled speed, suddenly stopping would at least leave nasty marks, or, potentially, a snapped neck.

Through half of downtown, dodging a slowly increasing crowd of commuters, and right to the edge of the ancient-turning-modern district of Bachron, Istuuc finally arrived at the hospital where his mother was. If he had taken the train, it would have been another twenty minutes or so before he arrived. Of course, if he had walked, it would have taken yet another twenty more than the train. On any other day, Istuuc wouldn’t have abused his right to use techniques in public and would have just used the public transit system.

If anything, Istuuc respected the growing desire for shared methods of transportation and improved train designs.

But, against all previous ideas of what he knew his mother to be, it seemed worth racing to the hospital to see just what could possibly take down the woman who had been running the Knowledgers Guild for over forty years.

Istuuc turned around one last corner and walked the last few-dozen feet up to the two-story stone structure built at least twenty years before most the nearby shops and shared-living homes. He came up to the finely crafted wooden double-door and pulled on the large, bar-shaped brass handle.

The receptionist looked up when Istuuc let the visitor entrance slowly close as he rapidly approached his desk. “Guildmaster Zault—well, Mr. Zault. Good morning,” he said with a frown. “She’s doing alright.”

“Just tell me what room she’s in, please.”

“That’s fine, I’ve been in here before. Thank you.” Istuuc strode past the receptionist, through the open door, and straight down the hallways, almost bumping into nurses and doctors along the way, until he arrived at his mother’s bed.

“Ah. Istuuc!” she said with a smile. Sansek was wearing a set of thin linens provided by the hospital and half-covered by a thick blanket. “You were quite fast to arrive—working on your dashing, eh?”

Istuuc held her shoulders and hugged her as delicately as he could. “Did you get poisoned, again?” He let go, found the nearest chair, and pulled it up close to sit. “Tell me someone tried to assassinate you so I can half-kill them, then throw them to the police.”

Sansek laughed with volume, but he noticed her body seemed strained and weak. “No, nothing like that. I’m just old.”

He laughed. “I’m the old one! You’re way stronger than I could ever be, Mom. I’m sure you’ll get over whatever this is in a week, and then you’ll be right back to your guild. I can’t imagine what they’re doing without—” Istuuc was looking out a nearby window when his mother cut him off.

“Listen, Istuuc. I trust the diagnosis; in fact, I’ve known about this for many few years, so it was expected to get worse at some point.”

Istuuc raised an eyebrow and turned his gaze back to her. “Get worse? What?”

“I have the decay. No amount of modern healing technique can stop the decay—you know that.”

Sansek cut him off again, this time holding her hand up to his mouth. “Trust me, I’ve tried. I’ve been fighting for almost ten years, ever since the early signs. You know we have all kinds of technology still unreleased for the public; you don’t think I haven’t used every detector and every experimental technique to fight it?”

“Then why are you here? Why aren’t you at your guild, having your best scientists work on it some more?”

She laughed again. “Because I screwed my ankle and hurt my hip. It’s mostly unrelated—though I fear I’ve got only a few weeks left in me, anyway, so it really doesn’t matter what got me here. There’s nothing any hospital can do for me now.”

Istuuc sat without rest in the wire-frame guest chair, shifting his head back and about while sighing, and touching his fist to his face and setting it back down again.

“Don’t be like that,” Sansek said after a minute of silence. “The guild will be fine without me.”

“That’s what you’re worried about?” Istuuc sat upright again, then leaned closer. “It’s all fine so long as the guild is fine?”

“We can’t live forever, Istuuc. Seventy years is pretty good for someone as active as I am.” She reached out to his head and rubbed his black and graying hairs into his scalp. “Go find yourself a family if you don’t want to be like me. But I’m happy to have helped Andria grow. My family, both you and my guild, will be just fine when I’m gone.”

Istuuc had no words to reply with. He took his mother’s thin hand—the hand that still managed to show strength despite how small it had become—and leaned back in his chair once more. For a while, until the sunlight filled the hospital, they sat in silence. Then, his mother spoke.

“Listen,” she said. “There’s something else I haven’t told you about.”

“I have spent all my life, even before you came along, trying to make the world—at least this country—a better place.”

“Of course. I understand that.” Istuuc held her hand with both of his. “I know how hard you’ve worked.”

“No. That’s not my point, Istuuc.” She pulled herself up close to him and held his hands with hers. “I never told you this because I didn’t want to ruin things. I mean, especially when your father passed, and with how much I was gone for work . . .”

“What are you saying, Mom?”

Sansek sighed, and with a squeeze, she said, “You’re still my son—our son. But you were adopted. And not just adopted: You are one of a dozen living refugees from another planet called ‘Earth.’ The man who was taking care of you died soon after he brought you here. You had to have been three years old, maybe four, when we decided to bring you into our home. It’s still classified information, but I think you ought to know. I might not have another chance to tell you.”

The words had no weight to Istuuc. He thanked his mother for telling him, and then he stayed with her until noon. Then, her aides and his aides became too much of a hassle to ignore, and they both got back to work. Of course, she remained in the hospital for another few days while she recovered from the mending procedures while he visited once each day.

Within the week, she was brought back to the Knowledgers HQ. 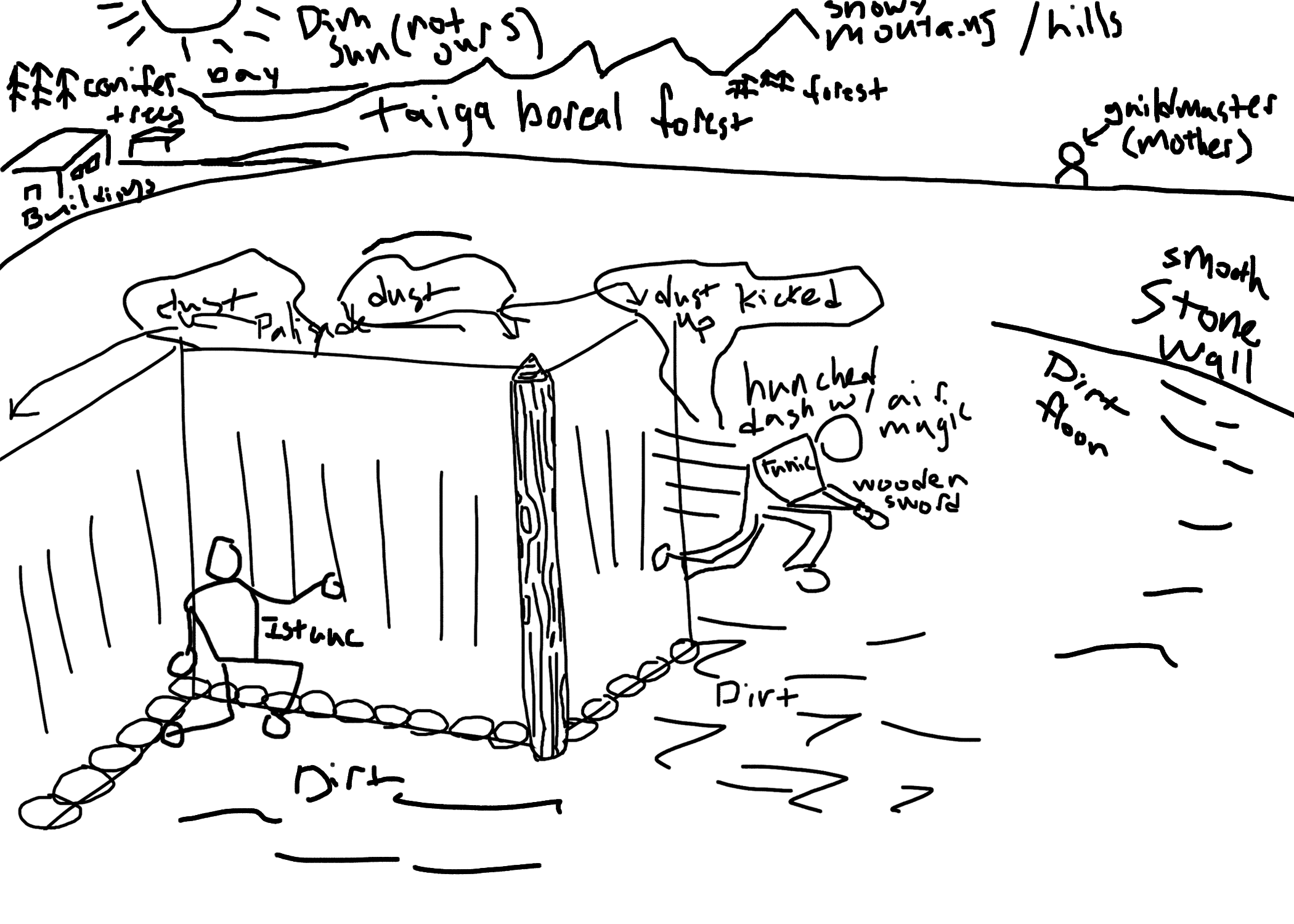